Report of the President's Commission on the Assassination of President John F. Kennedy with a New Introduction written by Senator Arlen Specter before his death.  (get the report)

But exhaustion and fatigue---initially thought to be the aftereffects of months of vigorous campaigning---were found to be far more serious. After a series of tests and consultation with several doctors, Specter was diagnosed with Hodgkin’s disease, Stage IVB, the most advanced stage.

He had received death sentences before and lived to tell about it. To Senator Specter, this diagnosis was another challenge. After all, he still had a job to do.

His cancer treatments came as he reached the height of his power---surrounded by political storms that polarized Washington and threatened to shut the Senate down. His leadership positions made it his job to manage Supreme Court nominations and public- health appropriations as he faced his own illness. He had fought on public-health issues for years, but now it added potency to the message that the messenger was ailing himself.

The phrase “Never give in” became Specter’s mantra, invoking the famous words from Churchill in his battle with cancer. This moving book describes the treatment the Senator received and offers his advice on how to handle the side effects (both visible and private), hair loss, and of course, maintain a nearly daily squash regimen. So, how does one move forward when faced with mortality? It’s simple. Work.

"Never Give In brims with the singular tenacity and humor that have characterized Arlen Specter's nearly thirty years in the United States Senate. This book is both an entertaining read and an unflinching account of  the experience of fighting an intensely personal battle on a highly public stage."---Michael J. Fox

"Working with Arlen for many years on the Senate Judiciary Committee, I have witnessed firsthand his spirited battles on the political stage. Even while confronting his physical trials, Senator Specter continued to be a great asset to Pennsylvania, the Senate, and our country. Highlighted by insight that only Arlen could provide, Never Give In portrays a life of courage and fortitude." ---Senator Orrin Hatch (R-UT)

"Understanding Arlen Specter's steely endurance is a key to understanding his success in the Senate and in life.  Look up tenacity in the dictionary and you'll find Arlen's picture.  Trial by fire has tempered him and made him stronger, and wiser."-- Senator Patrick Leahy (D-VT, Chairman, Senate Judiciary Committee)

“Written in Senator Specter’s trademark candor, Never Give In is a compelling tale of survival – both personal and political – from one of the Senate’s most independent voices. Riding the train home with him now for almost 25 years, I count Arlen among my closest friends in the Senate.  The words courageous and inspiring hardly do him justice – but trust me, he is both.”-- Senator Joe Biden (D-DE)

“I’ve been privileged to work side by side with Arlen for over 18 years.  While I respect his intelligence and honesty, and value his friendship, perhaps most of all I have admired his toughness in the face of adversity.  He just never gives up.”—Senator Tom Harkin (D-IA)

(For more information, reviews or to order click here)

“Life Among the Cannibals: A Political Career, a Tea Party Uprising, and the End of Governing As We Know It”
(from Amazon.com)

"LIFE AMONG THE CANNIBALS"

​During a storied thirty-year career in the U.S. Senate, Arlen Specter rose to Judiciary Committee chairman, saved and defeated Supreme Court nominees, championed NIH funding, wrote watershed crime laws, always staying defiantly independent, “The Contrarian,” as Time magazine billed him in a package of the nation’s ten-best Senators. It all ended with one vote, for President Obama’s stimulus, when Specter broke with Republicans to provide the margin of victory to prevent another Depression. 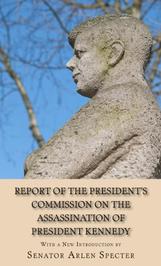 (From Amazon.com) This is not simply the memoir of a cancer survivor. Nor is it just the memoir of a respected senator. This is an unprecedented glimpse into a man who is both. It is inspiration for people of all political persuasions; of how to persevere and succeed---despite what the doctors may say, despite what the tests might show.

In early 2004, Senator Specter was in the midst of a grueling primary race, facing significant opposition from the right as he worked to win his party’s nomination to run for reelection for his Pennsylvania senate seat. It would be the most difficult election in his quarter-century career in the Senate. Following on its heels were two more challenges---the general-election race and opposition to his elevation as Chairman of the Judiciary Committee, his lifelong ambition. He overcame all three challenges in time for his seventy-fifth birthday.

Specter opens Passion for Truth in 1959, recounting his beginnings as a newly minted assistant district attorney prosecuting union racketeers -- and earning the recognition and respect of Attorney General Robert Kennedy, who would later call on Specter to serve on the Warren Commission. He describes his election to the office of district attorney at the age of thirty-five and how he structured what would become the model for the modern prosecutor's office. He also details his landmark crusades to promote the legal rights of victims at sentencing, to preserve evidence for rape prosecution, and to expose the inhumane treatment of America's prison population.

Elected to the Senate in 1980, Specter continued his tireless fight for crime control and judicial reform at the national level. His wisdom and experience would prove invaluable in such measures as the creation of the office of CIA inspector general -- the only tangible reform to follow the Iran-Contra scandal -- and the investigation of the killings at Ruby Ridge, Idaho, which in turn led the FBI to change its rules of engagement on the use of deadly force. And as the chairman of the Senate Intelligence Committee and the Judiciary Committee on Terrorism, he held top Pentagon officials accountable for the truck bombing of Khobar Towers, which left nineteen Americans dead at the U.S. Air Force base in Saudi Arabia.

In this gripping political masterpiece, Arlen Specter brings all of these events to life, taking the reader into the courtroom, the cloakroom, and the Senate chamber, and offers a clear and honest vision for reforming the way Main Street and Wall Street are governed. --This text refers to an out of print or unavailable edition of this title.

(For more information, reviews or to order click here)

(From Amazon.com) Imbued with rugged individualism and fierce independence from his youth on the Kansas plains, Arlen Specter became a renowned big-city prosecutor and then a respected, powerful U.S. senator.

In this brutally honest book, Senator Specter analyzes these and other controversies, assessing each through both a legal and a historical lens. Throughout, he tells the truth, naming names, identifying where the system worked and where it failed -- and even admits to his own mistakes. This illuminating memoir is vintage Specter. thoughtful, provocative, and deeply informative. 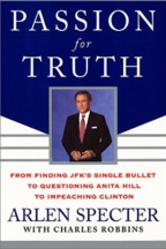 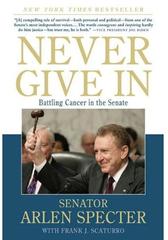 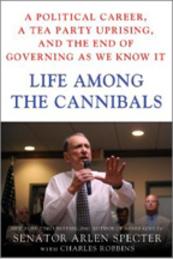 In Life Among the Cannibals, Specter candidly describes the battles that led to his party switch, his tough transition, the unexpected struggles and duplicity that he faced, and his tumultuous campaign and eventual defeat in the 2010 Pennsylvania Democratic primary.

Taking us behind the scenes in the Capitol, the White House, and on the campaign trail, he shows how the rise of extremists---in both parties---has displaced tolerance with purity tests, purging centrists, and precluding moderate, bipartisan consensus.

(For more information, reviews or to order)