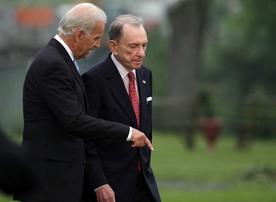 Arlen Specter had a long and storied political career, most notably his tenure in the Senate from 1981-2011, the longest for any senator from Pennsylvania. He was considered among the chamber’s best and brightest – and most fiercely independent -- members.

As chairman of the Senate’s Judiciary Committee, Specter was, as The New York Times put it, “long regarded as its sharpest legal mind.” The newspaper also called Specter “hard-edged and tenacious” yet he was consistently moderate and centrist.

Specter first gained renown when, as a young lawyer he worked on President Lyndon Johnson’s Warren Commission and was credited for conceiving the “single-bullet theory,” which concluded that President Kennedy and Governor John Connolly were struck by a single bullet fired by a lone gunman.

Specter’s first run for public office came in 1965 when he sought to become district attorney of Philadelphia. Spurned by the Democratic Party in a heavily Democratic city, Specter bucked the odds and ran as Republican – and won. He ran for re-election in 1969 and won again. Other runs for mayor (1967), Pennsylvania governor (1978) and president (1995) did not go as well.  ​ 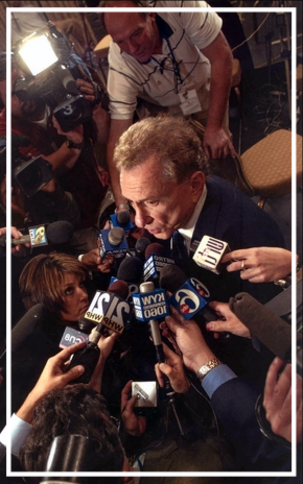 The award is given to organizations, businesses and projects that exemplify outstanding achievement in the field of historic preservation throughout the region. A presentation was set for June 3, 2015 at the Union League in the largest gathering of preservationists in the Philadelphia area.

The center won the award for the $4 million renovation of the Roxboro House, an historic structure which had fallen into disrepair since its construction circa 1800. The building was stabilized while keeping its distinctive semi-octagonal wings.

The university purchased the wood-frame federal-style house around 2006 and the renovated structure was dedicated as the Arlen Specter Center for Public Service in September 2014.

The Roxboro House, located in the East Falls section of Philadelphia, was occupied over the years by some notable Philadelphians, including Caspar Wistar, who published the first American textbook of anatomy in 1811.

Smerconish says representatives in Congress could learn something from the White House Correspondents’ Dinner.

"You are entitled to your own opinion, but not your own facts."

Specter lost his first race for the U.S. Senate in 1976 in the GOP primary to John Heinz, but he ran again in 1980 and never looked back, winning that race and re-election four times until, after having switched to the Democratic Party in 2010, he lost his seat in the Democratic primary.

During his time in the Senate, Specter was known for his independent positions, including his support – unusual support for a Republican – for Roe v. Wade, the U.S. Supreme Court decision that legalized abortion, as well as embryonic stem cell research.

He helped derail the nomination of GOP-favored Robert Bork to the high court, but then supported Clarence Thomas, while enraging many with his aggressive questioning of Anita Hill. Specter also voted to acquit President Clinton in 1999, calling his impeachment proceeding before the Senate a “sham trial” without witnesses.

In a later and politically fatal break with Republicans, Specter cast the critical vote supporting President Obama’s American Recovery and Reinvestment Act of 2009. Specter said he was putting country before party as he felt the economic stimulus package was needed to move the country out of the Great Recession, as many in retrospect believe was the case. That decision undermined Specter’s support within the Republican Party, causing him to seek re-election as a Democrat.

After leaving the U.S. Senate, Specter returned to the practice of law in Philadelphia. He took on special matters of interest on appellate court arguments and provided strategic advice on federal and state legislation, though he did no lobbying. He also taught about the U.S. Supreme Court as an adjunct professor at the University of Pennsylvania Law School.

During his lifetime, Arlen Specter was the recipient of numerous awards and accolades. He was selected by Time magazine during his last term in office as one of the nation’s Ten Best Senators. Locally, the Philadelphia Trial Lawyers Association in 2001 honored Specter with its prestigious Justice Michael A. Musmanno Award, given annually to a lawyer or legislator who has advocated for the rights of victims.

Specter wrote three well-received books: Never Give In, about his battles with illness, including a brain tumor and cancer; his autobiography, Passion for Truth; and Life Among the Cannibals, a memoir in which he denounced the partisanship of Washington, D.C.  Arlen Specter was a near- daily squash player and his name adorns squash’s national home, the Arlen Specter US Squash Center in Philadelphia.

Arlen Specter was a near-daily squash player and his name adorns squash’s national home, the Arlen Specter US Squash Center in Philadelphia, opened in October 2021 as the largest squash facility in the nation with 20 courts located in Philadelphia's thriving University City. The center hosts many major competitions, including the U.S. Open Squash Championships, while also providing community programs in partnership with Philadelphia's Urban Squash Program SquashSmarts.(Read article, US Squash)

Arlen Specter was born on Feb. 12, 1930, in Wichita, Kan., and was raised in Russell, Kan., the fourth and youngest child of Lillian and Harry Specter, émigres from Eastern Europe. His was the only Jewish family in Russell, coincidentally the hometown of another senator and GOP presidential nominee, Bob Dole. Arlen Specter married Joan Levy on June 14, 1953; their marriage produced two sons, Shanin and Steve. Arlen Specter died on October 14, 2012 at 82 due to complications of non-Hodgkin’s lymphoma.